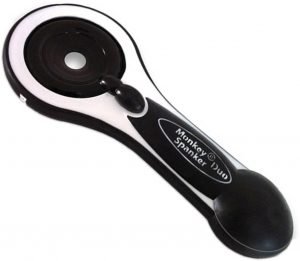 The Monkey Spanker comes packaged in a plastic bag in a cardboard sleeve similar to something you would find a necklace in. It features an image of the Monkey Spanker ‘The Ultimate Couples Sex Tool’ and shows on the back the different uses for the toy as well as the fact it is made in the UK. Although, it’s named after the American term spanking the Monkey. The box is quite size efficient and works well as storage should you choose to keep it. The box also includes simple instructions and batteries.

The Monkey Spanker itself comes across quite poorly made. Some edges need finishing, the rubber has marks and in some places it appears see through.

The body of the Monkey Spanker Duo is made from hard ABS plastic with the ring part made from rubber gel. It stretches well around the ring and feels fleshy on the clit tickler. The other parts of the toy seem to be a type of TPE.

The small bullet is powered by three watch batteries. It has a seal to make it fully waterproof.

Depending on whether you want to use the Monkey Spanker Duo for the man or woman, you need to change the direction in which the small bullet is inserted. The bullet clips in very securely to the back on the Monkey Spanker Duo, but you need a long blunt instrument to push it up and out again which can be tricky. I also find that when I do this it scratches the bullet and ruins the finish. Inevitably I will eventually just break the bullet. I also managed to crack the button in my attempts to remove it. It has medium vibrations when out of the Monkey Spanker Duo however when inserted it really doesn’t provide much vibration through the solid body of the spanker.

Use five and six are as a clit tickler and vibrating sex. The truth is if I wanted a clit toy, I’d get one. This does not suffice in any way to getting my lady off or even turning me on. The clit ticker and be positioned as such with the pad at the ending of the vagina to create ‘vibrating sex’.No wait, there’s still that complete lack of vibration.
Use seven is for vibrating nipples/clit through the hole of the pad. You’re just pushing for more things to put in now aren’t you really?

The box states “you could even use it as a spanking device”. I could also do pretty much anything else around the room but they don’t need to state it.

The monkey spanker is easy to clean as it is 100% waterproof, just use soap, toy cleaner and warm water. It picks up lint and dust really easily so will need cleaning a lot!

I would definitely stick to the cheaper simpler versions solely for male use, the original Cheeky Monkey, the Vibro if you like some vibrations or Double Trouble if you want stronger vibrations. 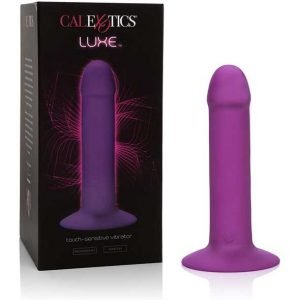 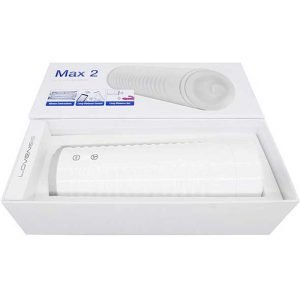 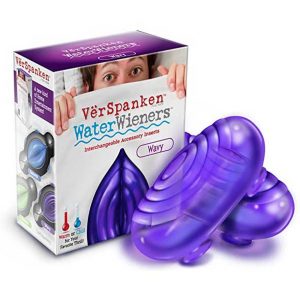 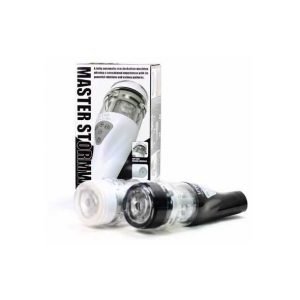