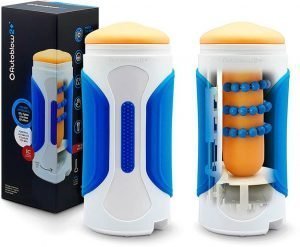 Unless you’ve been living under a rock, you have probably heard about the Autoblow 2. Its creator, Brian Sloan, definitely rose to popularity following its first hit in Indiegogo. In fact, someone contacted him about making a reality show about his rather colorful and liberating life when Autoblow 2 was completed and made available for online pre-ordering. Unfortunately he declined, or we would have known if he needed the oral sex machine as the next guy does.

Unlike other dick sucking toys, the Autoblow 2 is plugged directly to a wall outlet. As long as you pay your electricity bills diligently, using the blow job toy as often as you want would not be a problem. Compared to a battery-powered pleasure device, it is not at risk of conking out while you are in the middle of buffing the banana and treading on jizz-balanced ground. The only time it will stop is when you turn it off. Did I mention that the metal-motor that makes the automatic blowjob machine work like a charm is rated to last over 500 hours of use?

Some male oral sex stimulators are made to just pump up the jam — a full pumping and stroking action from head to balls, while others are just designed to pleasure the head area. The Autoblow 2 is designed to treat you to other blow job styles, including fire starter and tootsie roll. This is made possible through the spring-loaded beads that will stroke you up and down at the speed that you want. Still think it’s not the automatic blowjob machine it is cut out for? What is even better is that the springs expand to ensure a tight and snug fit; much like a woman would if you’re down on her too. The closer she nears to the point of intense pleasure, the tighter she would be holding on to you, as though letting go would be the death of her.

Variable speed you can really feel

Since the Autoblow 2 uses a very powerful motor, you will definitely feel the difference between slow stroking and pumping frenzy. When switching from one speed to another, you only need to turn the dial at the bottom of the automatic blowjob machine. I know; the dial is like the only annoying thing about the Autoblow 2 since you would have to turn it rather than just a push button. And when you are in a damn hurry to get the deed done before someone walks in on you, it can be pretty frustrating. But, with the variable speed and spring-loaded beads, you can’t get a blow job that is more automatic than this.